In Pennsylvania, there are two types of constitutional challenges to a statute: facial and as applied. An as-applied attack on a statute is a limited attack. “It does not contend that a law is unconstitutional as written, but that its application to a particular person under particular circumstances deprives that person of a constitutional right” (Com. v. Brown, 26 A.3d. at 493).

“An irrebuttable presumption is unconstitutional when it (1) encroaches on an interest protected by the due process clause, (2) the presumption is not universally true, and (3) reasonable alternatives exist for ascertaining the presumed fact” (In Re J. B., 107 A.3d. at 14).

Our Superior Court ruled in Commonwealth v. Mohammed (2020 PA Super 256) that SORNA II’s provisions that sexual offenders pose a high risk of recidivating is an irrebuttable presumption that clearly, palpably, and plainly violates Appellant’s right to reputation. It was not appealed to the PA Supreme Court by the Commonwealth. In a Common Pleas Court case of Commonwealth v. Gruver (66 CR 2019), where the Court ruled that the defendant did not have to register because “[t]he absence of any opportunity under SORNA for a convicted sexual offender to challenge the presumption that he is at high risk of re-offense represents an unconstitutional irrebuttable presumption which, in conjunction with the resulting consequences—the requirement to register, the damage to reputation (a fundamental right under the Pennsylvania Constitution), and the punitive effect—violates Defendant’s right to due process,” which was only appealed to the PA Supreme Court by the Commonwealth because the Commonwealth did not feel that a Common Pleas Court judge could rule on a question of constitutionality, which our Supreme Court asserted 7-0 that a Common Pleas Court judge may rule on constitutionality, as of this date, Gruver, who was to register as a Tier II offender, does not have to register.

Where does this leave us in the case of Commonwealth v. Torsilieri? Mr. Torsilieri is challenging SORNA II facially (i.e., the law is unconstitutional as written for everyone) rather than as applied. If the Chester County Court of Common Pleas agrees with Mr. Torsilieri then the statute would be struck down as it would be violating Art. 1 Sec. 1 of the Pa. Constitution’s indefeasible right to reputation. That would not be the end of the road though. There is an extremely high probability that the Commonwealth would appeal the ruling to either the Superior Court or the Supreme Court of Pennsylvania. Below is a pyramid chart showing the levels of the Pa. Courts 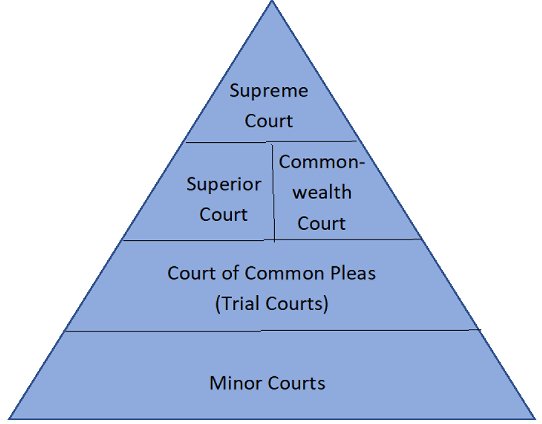 Click on the link to learn more about the Pa. courts: https://www.pacourts.us/news-and-statistics/media-resources?skip=50&take=10&itemType=1

Join us on the 4th Sunday of the month at 4 p.m. for a Virtual Open House with our board members.
> Learn More

PA Fearless Group, a support group for those on the registry and their friends and family, meets on the 2nd Saturday of each month at 4 p.m.
> Learn More

The Pennsylvania Association for Rational Sexual Offense Laws (PARSOL) believes all sexual abuse is unacceptable and that prevention, treatment, and healing are...

Those who wish to understand how Pennsylvania’s Sex Offender Registration and Notification Act (SORNA, Or Megan’s Law) operates today may be dismayed...

Those who wish to understand how Pennsylvania’s Sex Offender Registration and Notification...

STROUDSBURG, Pa. – PARSOL is praising a ruling by the Pennsylvania Commonwealth...

Help us sustain our momentum during the 2022 PARSOL Campaign!